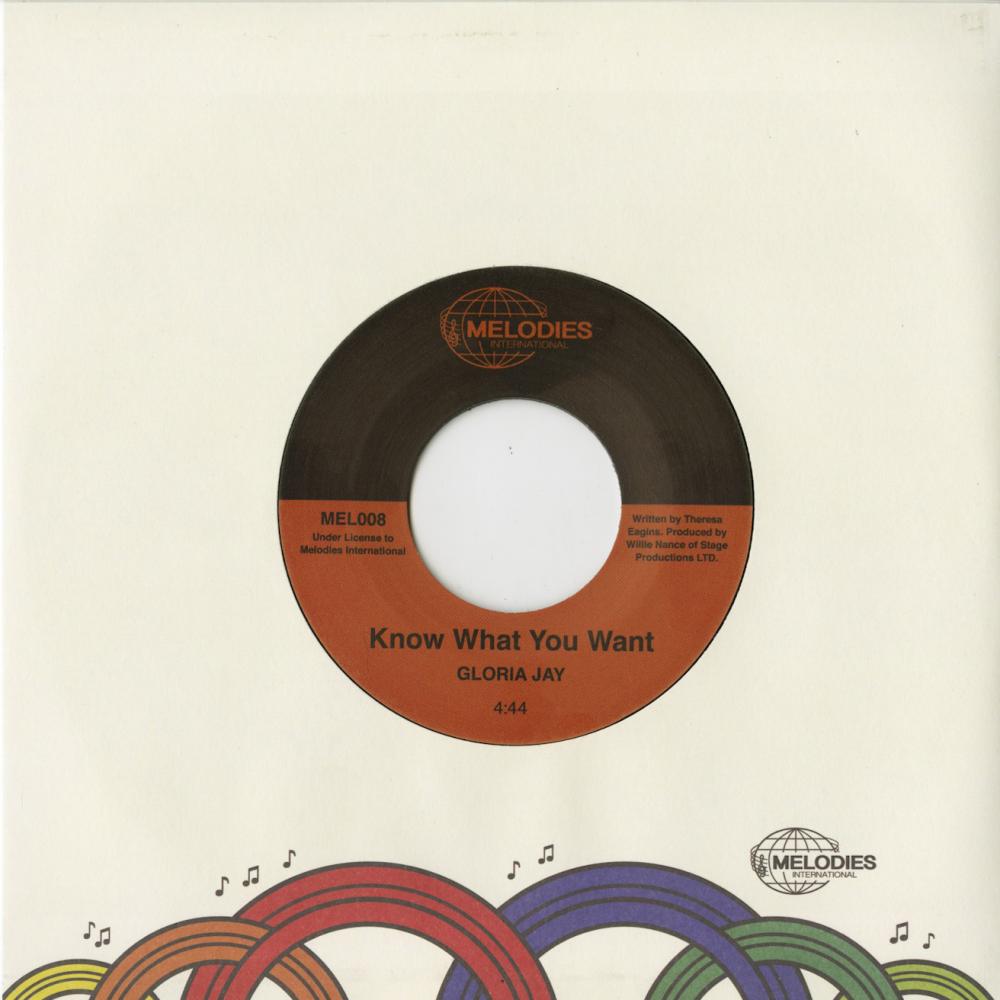 Gloria was signed to Stage Productions as a gospel singer with pure and raw talent she had developed in the choir of her father's Southern Baptist Church. She was 16 years old at the time. To tutor her for R&B vocals, Willie C. Nance of Stage Productions spent 3 months taking the artist back and forth for vocal training 25 miles each way, 3 days per week.

At the time, Mr. Nance had made plans to work with singer and songwriter Theresa Eagins to record “Know What You Want”. However, two days before the recording was set to begin, Ms. Eagins refused to move forward with the recording as she chose to take her religious faith more seriously and forgo the singing of secular music. Hence, Stage Productions turned to Gloria Jay to perform a song that would go on to move people thousands of miles away, many years later.

One of them was Patrick Forge: “Back around 1990 I had a residency upstairs at the Wag Club on a Friday night alongside Paul Martin (he was Gilles P’s A&R right hand man at Talkin Loud), the night was called Respect and we played mainly Soul, Boogie and Jazz-Funk. Many years later I bumped into Paul at a record shop and he quizzed me about a tune I used to play at the end of the night at Respect. Hhe described it as being an independent Soul seven inch on a red label, slow to mid tempo... and more to the point a bullet of a record. It piqued my curiosity so much I burrowed through my seven inches and even made Paul a compilation of likely contenders; his response was “lovely selection, but it’s not on there!”. Damn, a mystery! Many moons later whilst I was living in Japan, my tenant in my London flat said she’d found an old mixtape I’d done for her way back when and was desperate to know the identity of something she was calling the “choo choo song”. Eventually when I was back in London she played the mixtape and I quickly identified her tune as “Fabrica” by Cesar Mariano, however letting the tape play some time later a familiar descending chord sequence catapulted me back to those Friday nights at The Wag, and Gloria Jay’s plaintive vocals reminded me of a record that had been absent from my life for far too long. I’ve no idea what happened to my original copy, I hunted another one down straight away, and I’ve kept it close ever since. “Know What You Want” is a song that goes deep in such a simple, unaffected, almost naive way, Gloria's voice is both sweet and raw, it’s built on simple chords and obvious instrumentation, but it’s so much greater than the sum of its parts.

“Know What You Want” is soul music, pure and unadulterated, there’s nothing getting in the way of the feeling, it’s straight from the heart.” Carefully re-mastered from the tapes, MEL008 comes forth in its original 7” format with a 14”x14” poster.

A. Know What You Want
B. I'm Gonna Make It